This App Note details how to maximize the TS200 output current. Maximizing output current is optional and it is intended for applications where the load impedance is too low.

TS200 is a High-Current Amplifier Driver

Figure 1. Simplified diagram is showing how to amplify signal from a function generator to delivery high current to a heavy load without current maximization

The TS200 can drive heavy load and outputs high current for most application without any optimization as shown in Figure 1.  In some applications such as driving magnetic coil or electrochemical reactor, where the highest possible current is desired, but don’t care about the voltage amplitude.  The highest current is achieved when the TS200 is operating near its maximum voltage.  If the load resistance or impedance is very mall, operating near the maximum voltage is not possible.  In such case, a series resistor may be used (Figure 2).

where IRMS is the RMS (root-mean-square) current and R is the series resistance. For example, a 5A peak (3.5A RMS) and 1-ohm series resistor will dissipate 12.25W power.

As shown in Figure 3 (top), the series resistor can also be used for current monitoring. Place the resistor on the low-side, one side is connected to ground, allow you to measure current with one oscilloscope channel. For best accuracy, connect the oscilloscope probe to the resistor in 4-wire Kelvin sensing configuration. The load current is proportional to the voltage across the series resistor given in the below equation.

If the load is ground referenced, load must be connected to the ground, swap the position of the series resistor as shown in Figure 7 (bottom). You still can measure the current, but needs two oscilloscope channels and configure them differentially (for example, channel 1 minus channel 2).

How to Measure LDO PSRR

Figure 4 is the TS200 high current amplifier functional equivalent diagram. It features a selectable AC or DC coupled input.  It also feature an adjustable DC offset voltage output which is useful if a fixed DC bias voltage is required. Two versions of the TS200 are available, the A-version has unity gain and the B-version has 20dB gain. 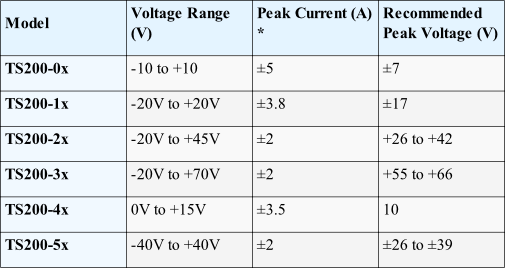