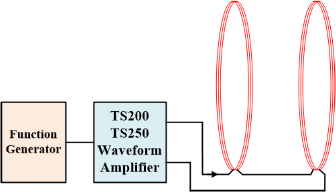 Use the below equation to calculate the Helmholtz field.

B = field in Tesla

n = number of turns in a coil

I  = current in amperes

Helmholtz coils, titled after the German physicist Hermann von Helmholtz, comprise of two identical magnetic coils placed in parallel with their centers aligned in the same axis just like a mirror image as exhibited in Figure One. A highly even magnetic field in a 3-dimension three dimensional space is created within the coils when electrical current goes through the high-frequency Helmholtz coils in the identical direction. These Helmholtz coils are generally utilized for measurements and calibration, for cancelling the ambient (earth's) magnetic field, and as a magnetic field for susceptibility testing of electronic devices. 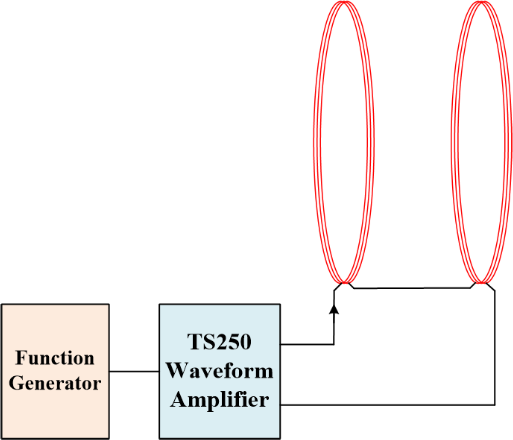 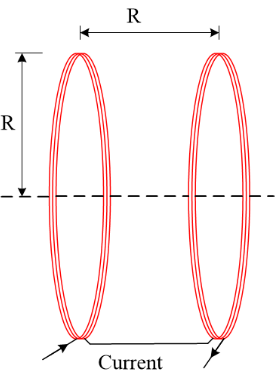 Figure 1. Single-axis high frequency Helmholtz coils consist of a set of coils with radius R. They are separated by a distance equal to R.

Design and Construction of Helmholtz Coils

If the Helmholtz coil testing frequency is close enough to its self-resonant frequency, the circuit model must also take into account its parasitic capacitances (CP1 and CP2). The parasitic capacitors are parallel to each inductor and resistor in series as portrayed in Figure 3.

Very high frequency Helmholtz coils may be series connected as shown in Figure 2 or in parallel as shown in Figure 4. Series connection allows the same current flow through the 2 magnetic coils. Generally, series connection allows for the greatest current and therefore the highest possible magnetic field. However, because 2 coils are in series, the total reactance is also doubled. Higher reactance could require higher driver amplifier voltage. The reactance can be reduced through the use of the resonant techniques explained below. 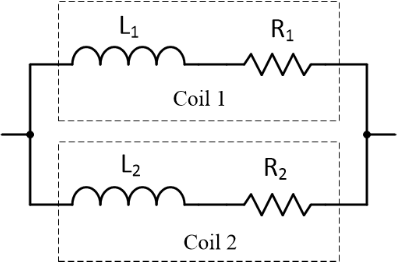 Connecting Helmholtz coils in parallel has the benefit of a reduced reactance. In fact, the reactance is reduced by one-half, but the current is also cut in half (current is separated into 2). A lower magnetic field is what results from this. A connected in parallel is okay if the following conditions are met: low reactance is necessary and the required magnetic field intensity is reached at half the current. An example of this is the case of the low-voltage amplifier driver. More information about Helmholtz coil impedance are in the Direct Drive Method section below.

If the coils are low inductance or the study is not high-frequency or both, the Helmholtz coils may be driven directly using a waveform amplifier driver including the TS250 Waveform Amplifier from Accel Instruments. Because of low inductance or not high-frequency, the coil's reactance is low enough to be driven by an amplifier directly. This is shown in Figure 5 and Figure 6. 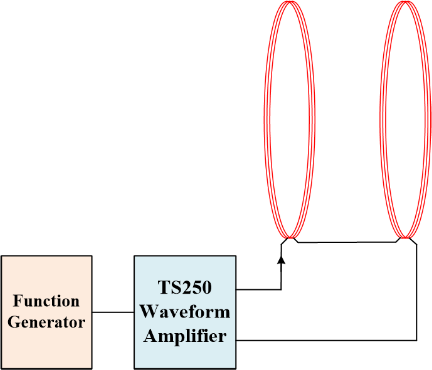